FROM KINGSTOWN TO CORINTH...and back

The church at Corinth was adversely affected by the immoral environment found in the city. Pride caused division and disruption in the services. Immorality and immodesty surfaced. Brethren were taking each other before the heathen courts instead of working issues out among themselves. There were questions about marriage, meats sacrificed to idols, women praying and prophesying with heads uncovered, abusing the Lord's Supper, the use of spiritual gifts, the resurrection, and collection. The church was one beset with problems and questions that needed to be answered. Does this sound like any congregation you know? Paul's instruction and  advice apply to Kingstown as much as they did to Corinth. Take this multimedia journey, From KINGSTOWN to CORINTH!

Corinth destroyed in 146 BC 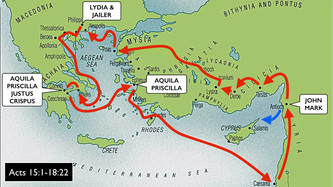 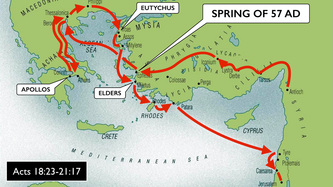 Paul's 3rd missionary journey
BACKGROUND OF THE CITY OF CORINTH
Corinth was situated on the Isthmus of Greece (called Achaia in the Bible) between the Ionian Sea and the Aegean Sea, above the Mediterranean Sea. About 50 miles to the east was the city of Athens.
The Corinth of Paul's day was relatively new. The old Corinth, which was famous and powerful in the days of the Peloponnesian War, was burned in 146 B.C. by the Roman proconsul, L. Mummius. Because it was a city devoted to the gods, a hundred years were required to pass before the city could be rebuilt. In 46 B.C., Julius Caesar rebuilt the city, populated it with a colony of veterans and freedmen, and named it Julia Corinthus. It soon became a very important commercial center.

With a population of 400,000 and being a prominent center of commerce in the Mediterranean world, it was a place for all sorts of vice. An example of its immorality was found in the temple of Venus (Aphrodite), which hosted 1000 priestesses dedicated to prostitution in the name of religion. The city's close proximity to the city of Athens probably added the problem of intellectualism. As noticed in the epistle, such an environment had its effect upon the church in Corinth. It is amazing that a church existed at all in such a city.

Background of Church at Corinth

The establishment of the church occurred during Paul's second missionary journey. It is recorded by Luke in Acts 18:1-18, which can be divided into three sections:
It appears from reading the epistle that the church was adversely affected by the immoral environment found in the city. Pride caused division in the church and disruption in the services (Chapters 1-4, 11). Immorality and immodesty found its way into the church, which gave it a bad reputation (Chapter 5). The brethren were taking their personal problems with each other before the heathen courts instead of working them out among themselves (Chapter 6). Other issues affecting the church included questions about marriage (Chapter 7), meats sacrificed to idols (Chapters 8-10), women praying and prophesying with heads uncovered (Chapter 11), abusing the Lord's Supper (Chapter 11), the use of spiritual gifts (Chapters 12-14), the resurrection from the dead (Chapter 15), and the collection for the saints in Jerusalem (Chapter 16). Thus the church was one beset with problems and questions that needed to be answered.

PURPOSE OF WRITING
Therefore, in answer to these reports Paul writes: TO CORRECT SINFUL PRACTICES AND REFUTE FALSE DOCTRINE

"Now I beseech you, brethren, by the name of our Lord Jesus Christ, that you all speak the same thing, and that there be no divisions among you, but that you be perfectly joined together in the same mind and in the same judgment."
TAKE THE QUIZ